How to resolve a replication conflict?

We explained that a replication conflict is caused by either network delays or irregular sequence of transactions.
In a typical conflict situation, a Receiver cannot decide which record is correct between the current value and the before value in Xlog.
To help users to deal with such replication conflicts, ALTIBASE HDB provides a few different conflict resolution schemes, such as user-oriented scheme, a master-scheme and a time stamp based scheme.

How to configure this mode?

User can specify the mode when creating a replication object as shown below: 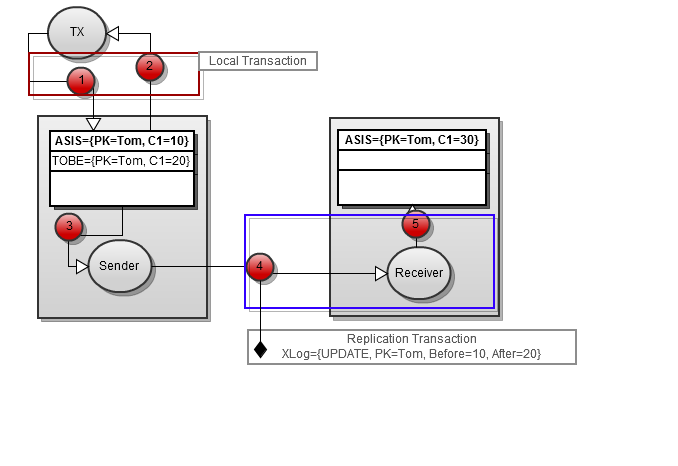 REPLICATION_UPDATE_REPLACE is one of properties in ALTIBASE HDB.
When it is turn on, Receiver does not check for a conflict any more. It simply overwrites the existing record even if there is a replication conflict.
In the above diagram, the conflict has occurred because the existing value ("30") is different from the before-value ("10") of XLog.
When user uses this method, the existing data in the remote server is modified to "20".

How to configure this scheme?

Set the value of REPLICATION_UPDATE_REPLACE property to "1" in $ALTIBASE_HOME/conf/altibase.properties so that Receiver does not check for any conflict. 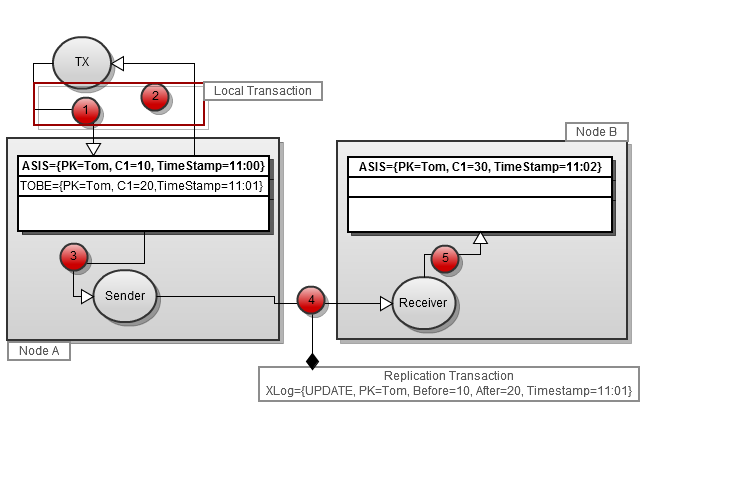 How to configure this scheme?

System clocks should be synchronized across the servers to ensure accuracy of the operation.

Users should know that these methods do not guarantee the data consistency perfectly, they only allow users to control the behavior of Receiver when replication conflicts occur.